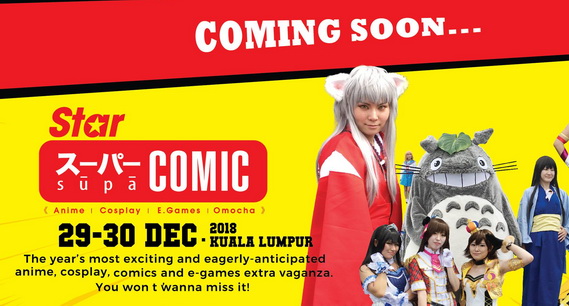 This is the title image from the Facebook page.

Boom! This is the current hot topic….. the buzz around town among the Anime community fans now!! Meme & 9Gag worthy images are also on the rise haha

So far nothing positive, the most I’ve seen was something neutral xD haha

Comments of “Wah! Wanna challenge CF?”, “Whachu know about Otakus?”. Too much corporate marketing lingo on the front page maybe. Who knows… the folks have not reached out to us yet, no proper media launch yet… no official launch either but it’s rolling forward.

The screen shot of their website which is causing all this roar. LINK: https://sites.thestar.com.my/supacomic/

Since I am the one here suggesting that the possible negative or neutral response to the advert below (then again its common for most people response negative to new things or change) could be due to ‘corporate marketing lingo’, i should elaborate a bit more. Here is the text :

“BEHOLD! THE YEAR’S MOST EXCITING NEW ANIME, COSPLAY, E-GAMES & TOYS EXTRAVAGANZA IS AT HAND! A million sights & sounds as well as thousands of renowned cosplayers and enthusiasts from around the globe! Experience arguably the most anticipated comics event ever! OTAKUs UNITE!”

Ada apa dengan gaya in? From what I know, in writing there is a certain margin of flair & exaggeration that can be considered ‘style’. I view this ‘style’ as a marketing style lingo, as these words & visuals will also be used in materials (flyer, posters etc) during presentation to potential sponsors and clients 🙂 So sometimes if the words are not ‘gempak’ enough, it doesn’t excite the client… especially to those who do not know about ACG events.

Bottom line –  I just think the up roar is about poor copyrighting. It was more exaggeration-fantasy than factual-realistic-expectation. I am a realist (trying my best to be an optimist too) but not a language expert. So it’s just what I think… 2 cents 😀

Suggestion – Now I don’t wanna leave this with out a suggestion of a solution 🙂 In my opinion, they should dial back a bit on the adjaectives and announce more objectively 🙂 Alternatively, if they came out with a BIG BANG BANG BANG announcement like Hideo Kojima, Hayao Miyazaki and Yaya Han coming to Malaysia’s ABCDEF Event – BEHOLD! THE YEAR’S MOST EXCITING NEW ANIME, COSPLAY, E-GAMES & TOYS EXTRAVAGANZA IS AT HAND! Experience arguably the most anticipated comics event ever! OTAKUs UNITE! Straight away blow peoples with a BANG, and your tagline + benefit-of-the-doubt = ALL VALID hype hehe Honestly, i think with this kind of announcement, most off the community won’t care what you write xD hahaha Half will be excited and the other half going “Sure or not?”, “Who are these organisers?”, “Sure not scammers?” xD haha

In conclusion, I’m truly excited to hear of yet another ‘big scale’ event! The organisers are of the Star Media Group, they’re legit *thumbs up*. Being ‘legit’ and credible (Star Media Group) and not a brand new company / entity they would have a reputation to keep so all in all… I’m excited & looking forward to it 🙂

With already 2 brand new events this year, TAGCC (Toys Anime Games and Comic Con) and Asia Comic Con (Malaysia), I think this little announcement / surprise will be a nice finale for 2018… the cherry on the sundae… the last Event Of the Year! Singapore has that event called EOY… and ours was CF… until now.

Lots of Love to you all! Be safe and enjoy your events!!
– The Captain –